Mirch Pakora are the perfect green chile fritters to serve with hot cup of Tea or Coffee. This Mirch Pakkora are most enjoyable by people, who likes the heat of green chillies. Green Chilly Pakora Recipe / Hari Mirch Pakora or Stuffed Mirch Pakora is one and same thing.

It’s a quick, simple and easy pakoda recipe and you can get them in most of the Indian sweet shops. If you will purchase mix pakoras, you will also get mirch pakoras in it. I have made plain Mirch Pakoda, But if you want, you can stuff the green chillies with stuffing of your choice, such as potatoes or paneer.

In Maharashtra and Goa, pakoras are known as bhajiyas/bhajji/bajji. Green chillies which are used for making this pakoda are bigger in size, and they are not spicy as their smaller counterparts. One can use small green chillies also, but they would turn out to be too hot and spicy. These green chillies have a light green color and are known as bhaji/bhajji/bhajiya chillies. You can easily get these chillies in Vegetable selling vendors.

My Mother-In-Law really loves this pakode and she has her own style of making it. So one day, I just followed her style and impressed here by presenting the same style Mirch Pakoda. She was surprised and enjoyed my pakode a lot. I must say that I have learned making perfect mirch pakora from her only. Thanks Mom.

Today My Friends are going to come at evening tea and they love spicy food, hence I would surprise them with this winter special Pakode. I generally enjoy this with hot cup of tea in rainy days. Mirch Pakoras is one of the easiest side dish recipe and can be served with variety of dals, curd curry or even with any vegetable curry. Here is the recipe of Green Chilli Pakora. 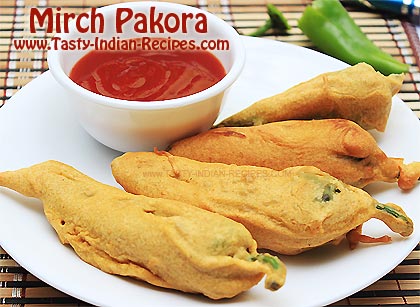 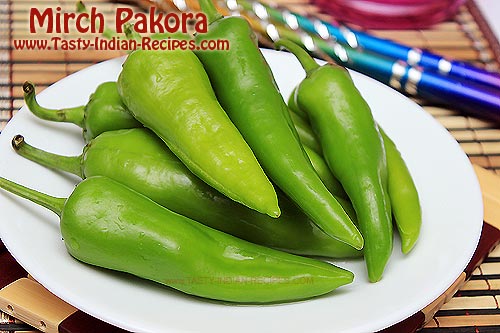 For besan (chickpea) flour batter you will require:

How to make Mirch Pakora Recipe:

Mirch Pakora Recipe are Green Chilly Fritters, made with Special Bhajiya Chillies. Here Big Green chillies are stuffed with the batter of Besan and Spices.

Cook Pakora's on medium heat. Cooking them at high heat will over cook Pakora's and may burn the batter. Server Pakora's with green Coriander Chutney.

You may also like to read Besan Ke Pakode and Urad Dal Ke Pakode. 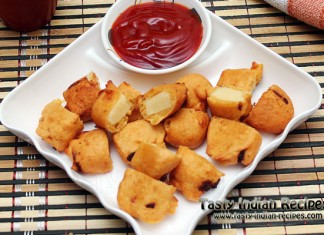 Priya - July 17, 2012
2
Cheese Pakora is one of the most delicious snack dish made with processed cheese, Chickpea flour, corn flour and spices. This is the best...