Paneer tikka is made with marinated paneer/cottage cheese cubes, arranged on skewers and grilled or baked in oven. It can be easily made at home and you just need to get some simple ingredients for this. I generally add diced onion, tomatoes and capsicum in this and these vegetables also brings a good flavor in paneer tikka. So I would suggest you to add those veggies.

Paneer Tikka is the most popular Barbeque recipe, which has its own special place in any Indian get-together, function or party. It is also considered as an easy and delicious Snack recipe, that is cooked in Tandoor or Oven. If you do not have oven then you can make it in a non-stick pan as well.

Though there are various Paneer Recipes in my blog such as Paneer Cheesy Kebab, Lasooni Paneer, Achari Paneer Tikka and many more, but this one is my most favorite paneer recipe.

Paneer Tikka is famous Indian Starter and generally served in every Indian Wedding or Party. People enjoy this starter because of its mouth melting flavors. Let us show you how to make restaurant style paneer tikka recipe at home.

How to make Paneer Tikka Recipe: 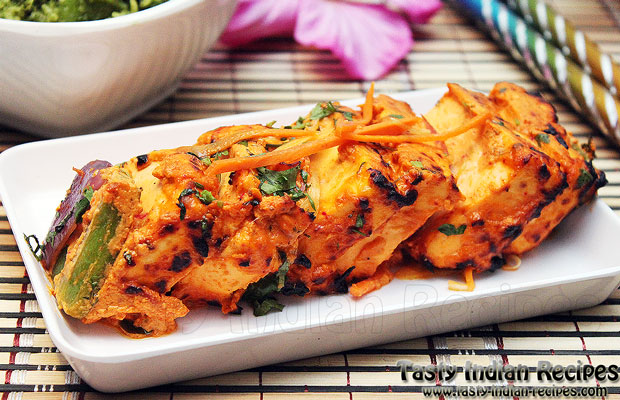 Paneer Tikka is a famous Indian Starter / Appetizer made with Paneer (Indian Cottage Cheese) and some Vegetables. It can be served as a Snack Dish also.

If you do not have oven then use a non stick tava for making paneer tikka, so that paneer does not stick while frying. You can aadd two tbsp besan in the marination. It will prevent the paneer from sticking to the tava and will give a nice taste.

Priya - April 16, 2015
0
Chocolate Brownie Recipe is a tasty Fudge made with Flour, Butter, Cocoa Powder, Sugar and Eggs. It is a cross between a cake and a cookie in texture.